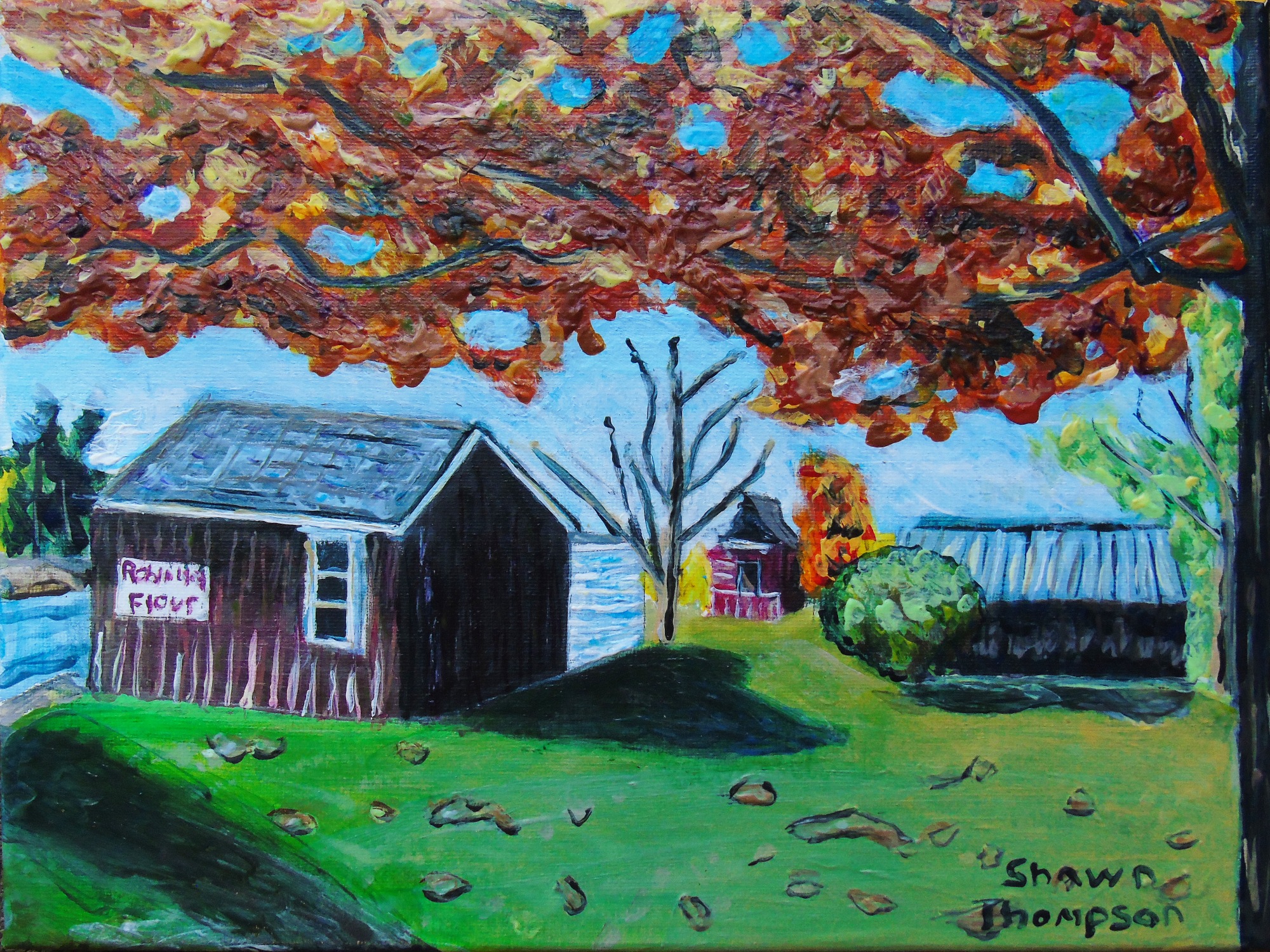 Here is the process I used to create 2 small paintings of the Lost Villages Museum, and a bay in South Stormont. These were done in early 2018

Here are the original photos I used for the paintings. These were taken in 2016

I started with 2 drawings in graphite pencil, which I then transferred to canvas by spreading graphite on the back of the drawings and pressing into the canvas. This creates an outline of the drawing on the canvas which is very faint. It is important to go over these drawings with pencil after this so that they are made more visible. Here are the original drawings before transferring them to the canvas.

After the drawing I then moved into the painting part of the paintings. I worked on both of these at the same time since they were so small and didn’t take up too much room on my table.

The first step was blocking in the main colours, I like to cover the whole canvas with paint as quickly as possible. It is important to develop the painting evenly so that you get the colour values down as accurate as possible

In this version I painted the orange of the tree, and put the first layers on the buildings. There is a litter of leaves on the ground which I showed with just some clumps of paint. I will add to this later.

In this painting I added the sky and the water. Although the in my photo the tree was on the right side, I put it on the left to draw the viewers eye into the painting, there are some white flowers in the lower right hand corner, and some small stratus clouds in the sky.

In this version I worked on the buildings. I noticed something was off on the store on the far left hand side of the painting, so I straightened the roof a bit. I added glazes of fairly thick paint to the orange tree in the foreground and the clumpy leaves in the foreground. Often times I would paint over the painting with thinner paint as to not leave any white areas. The shadows are still quite undeveloped in this version, but I will work on that later.

In this version I put a lot of work into the water. I also further established the tree and the weeds in the foreground. I also worked on the distant shoreline and added glazes of yellow and purple to the clouds. I still didn’t get to the flowering weeds in the foreground yet which appear far too white and flat.

In the final version I worked some more on the orange tree in the foreground as well as the buildings. I used a script liner paint brush to create the wooden effect of the buildings. I also worked on the leaves on the ground. I also put some final layers on the distant trees which were partially covered up before. And the very last stage was the signature.

In the final version, I added detail to the weeds in the foreground and also some more colours in the white flowers so that they do not look as flat. The water required further work as well as the tree and clouds. I added a shadow to the top of the distant clouds to help distinguish it from the sky